The island separates a part of Lake Baikal, which is called Small Sea. Small Sea widens from the southwest to the northeast, its length is 76 km, the largest width is 17 km, the smallest – 4 km, the maximum depth – 200 m. This is one of the most extensive shallow parts of the lake, a favorite place for vacationers.

There are two versions of name origin of the island. According to the first, the name came from the Buryat “oikhon”, which means “wooded”, according to the second – from the word “olgon”, which translates as “dry”. Both variants fully correspond to the image of Olkhon – it is both dry and wooded. In fact, the forest is found only in the central part, the northern and southern part of the island is steppe. 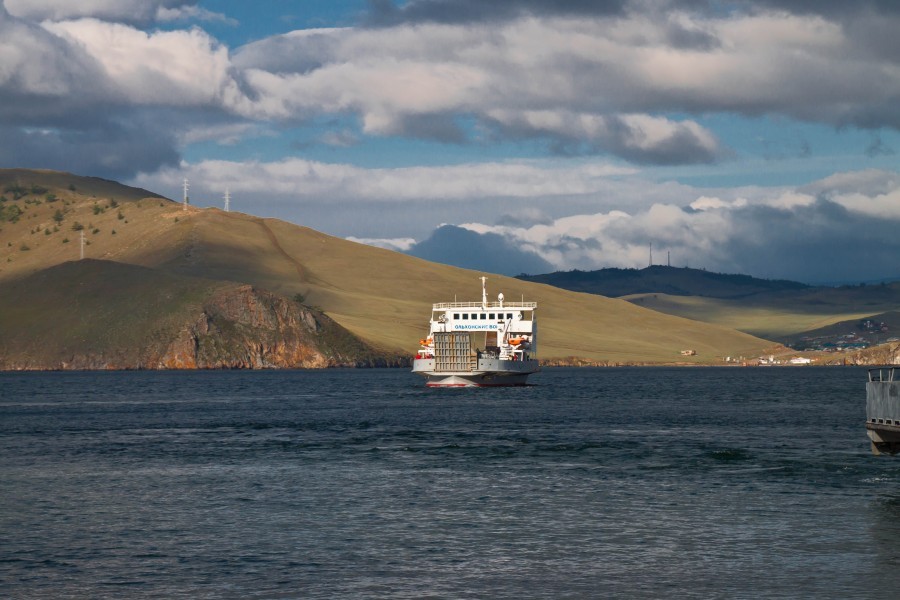 From the mainland, the island is separated by the “Olkhon gate” straight, which can be crossed by ferry. In winter an ice crossing is organized along the ice, during the formation and melting of ice the communication with the mainland is discontinued, there are no regular flights to the island.

Zagly Bay is considered to be the most sunny place in the Irkutsk region. The number of sunny days is 3 times more than in Irkutsk – 2200-2400 hours a year, as in the Caucasian resorts. 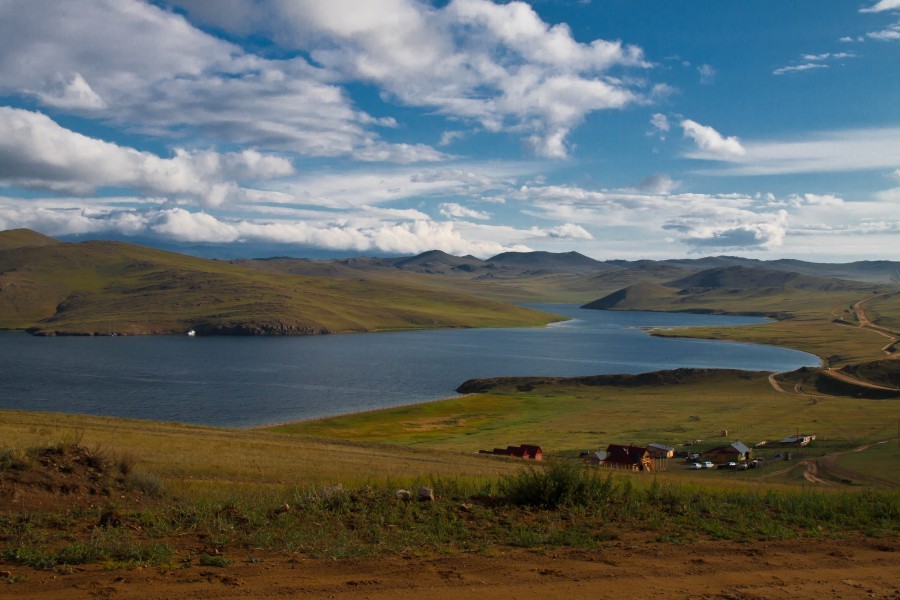 Horin-Irgi Cape is separated from Mare Head peninsula with a vertical cleft, which reminds of a horse head. The cape cliffs attract attention with sokuyas – ice splashes formed when the lake freezes. During the strong storm rocks can be covered with splashy ice up to 10-20 m in height and of up to 10-15 cm in thickness. From the north side steep cliffs covers with continuous splashy ice, and the cleft becomes one big fantastic ice decoration. 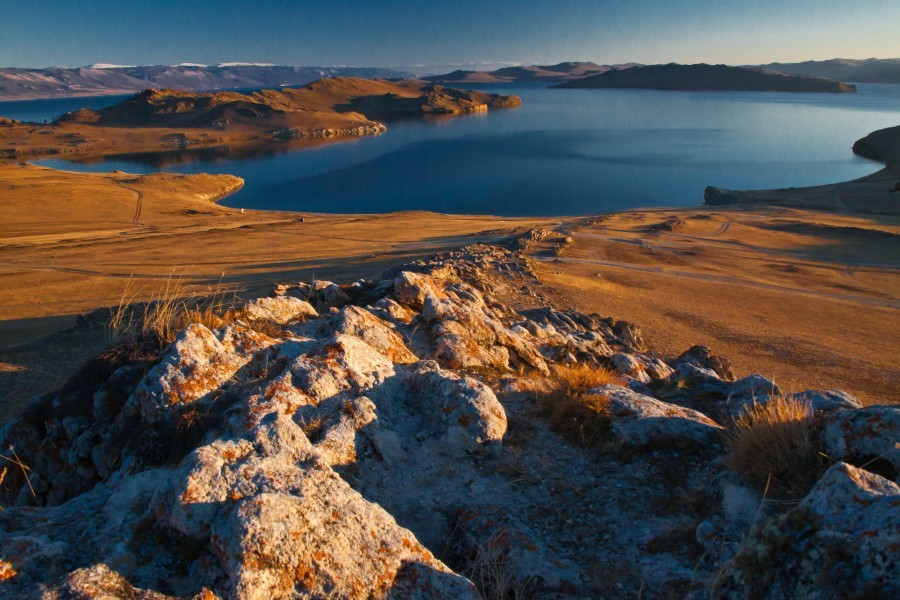 Horgoy is a steppe cape. Cape Horgoy is famous for its ruins of a perfectly extant  ancient Kurykan protective wall. You can see masonry on the flanks, the height of it reaches 2m in particular parts of the wall. The construction of stone walls was made without any fastening material. The total length of the wall is 292 m. 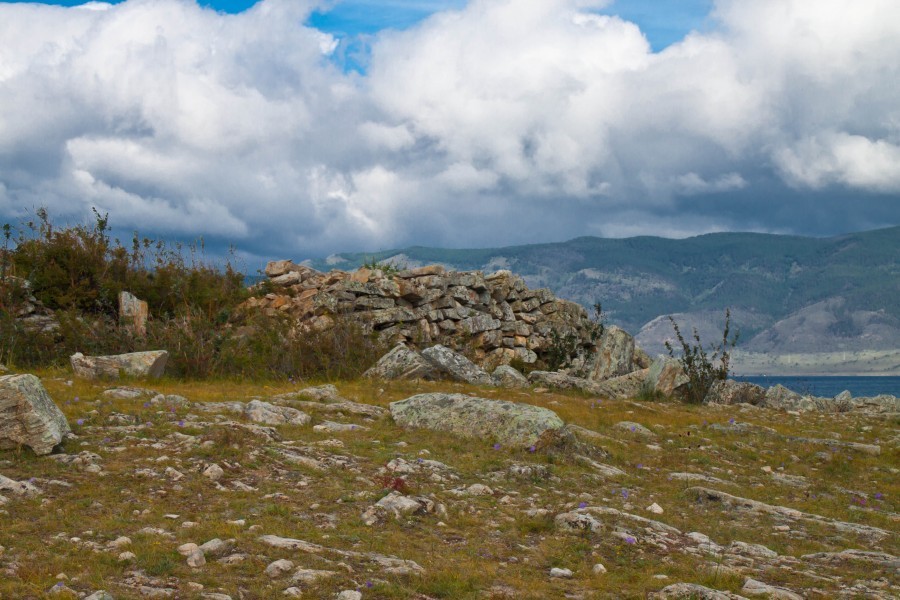 Khuzhir village is the main settlement on the island, with a population of 1270 people.

In the museum of local lore you can get acquainted with a diverse collection of ancient objects, reflecting the lifestyle and culture of the islanders. The museum was founded by the teacher of geography N.M. Reviakin.

There is also an information and excursion center where you can buy tickets, find a bus stop to Irkutsk, and get some souvenirs and guidebooks. (Baikalskaya str, 29) . 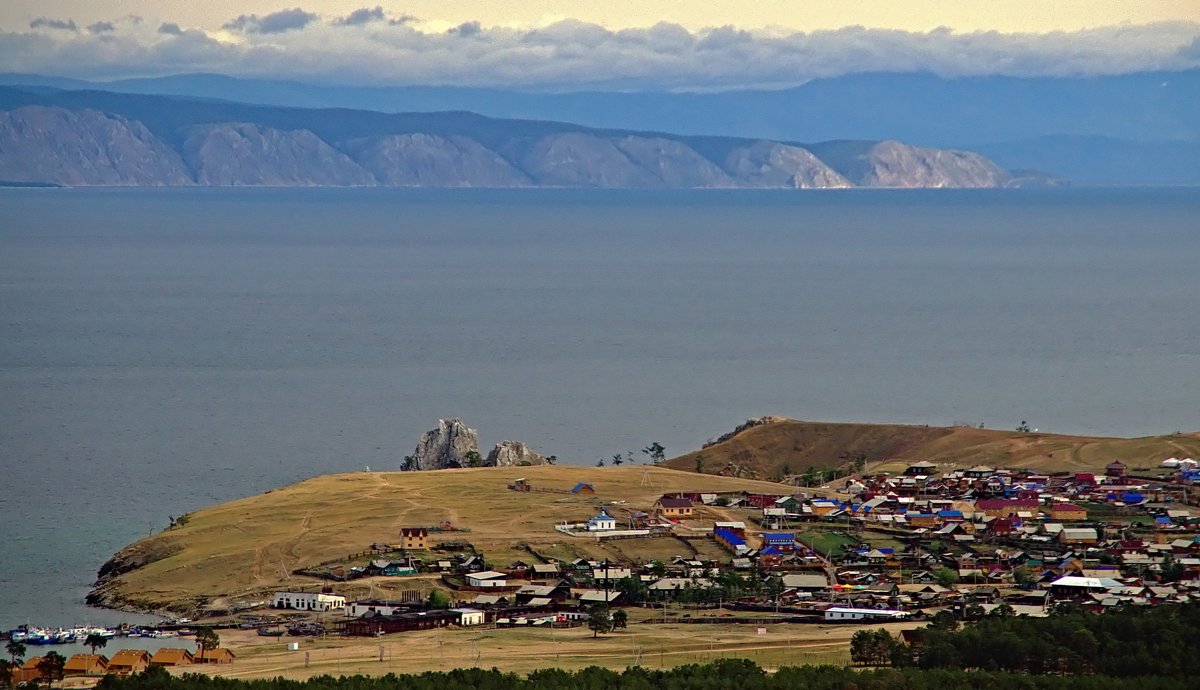 Cape Burhan is located in the central part of the eastern shore of Olkhon, on the territory of Cape Burhan. There is federal significance object of cultural (archaeological) heritage of the nations of Russian Federation “Burkhan” on cape Burkhan – the archaeological complex Burkhan (Shamansky Cape) with a certain territory (Resolution of the Councils of Ministers of the RSFSR of 04.12.1974, No. 624). Since 1981, Cape Burhan is  a monument of nature of regional significance. 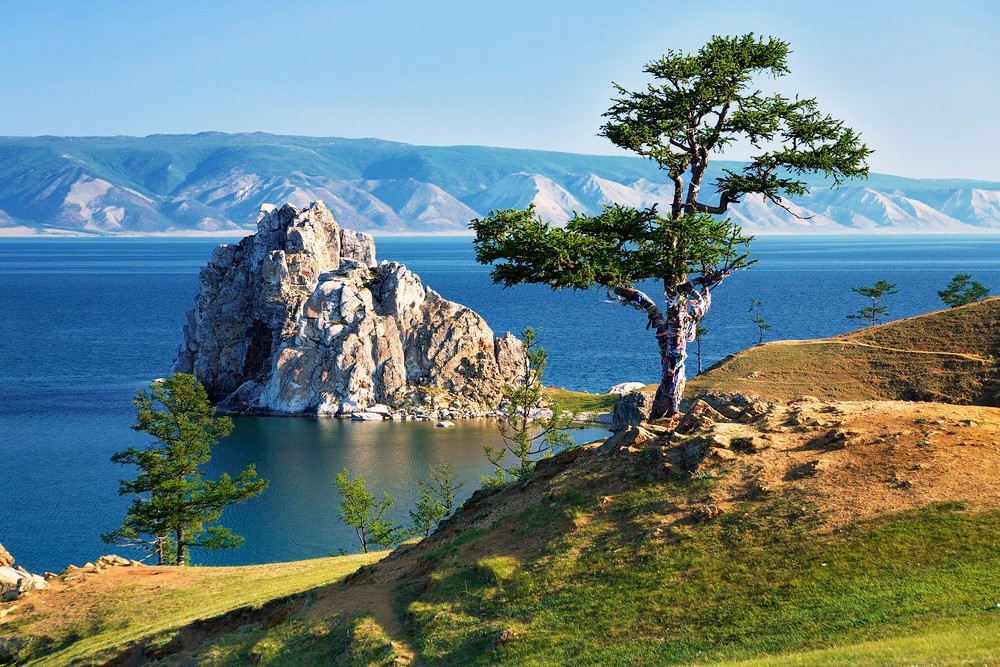 Cape Burkhan contains cultural layers with remains of material culture: archaeological items that have a historical, scientific and other cultural value and carrying in themselves scientific information about the history and culture of human in the period from the Neolithic – Iron Age to the period of ethnographic modernity (V millennium BC – I thousand AD, XVII-XIX centuries AD).

The sacred Shaman rock with a through cave, where only the island master had a right of access, for a long time remained forbidden to approach and no one was allowed to pass through. The entrance to the through cave is located at an altitude of 481 meters, its length is about 12 m, the width is from 3 to 4.5 m, the height is from 1 to 6 m. On the west side  the surface of the rocky Burkhan Cape has a natural outlet of brown rock that looks like a dragon pattern on white marble rock. It is more convenient to explore this natural phenomenon in winter from the ice. 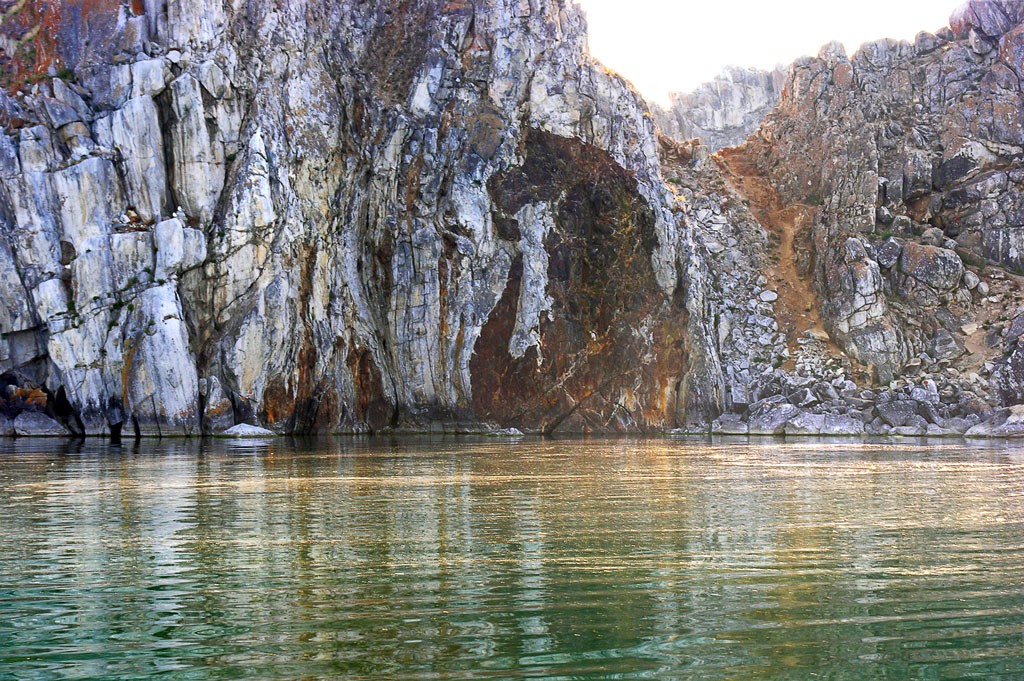 There is a magnificent sandy beach of Sarayskiy Bay, on the north of Cape Burkhan, which stretches for 3 km.

Shafts of sand hide cozy glades in the depths of the coast, surrounded by pine trees (Shaman Forest). There are dozens of trees at the age of 300-500 years and even more pines and larches, always struggling for life with sand and constant wind, has formed an unusual shape – you can see “skirts” from branches stretching along the sand and branches bent sharply to the earth. 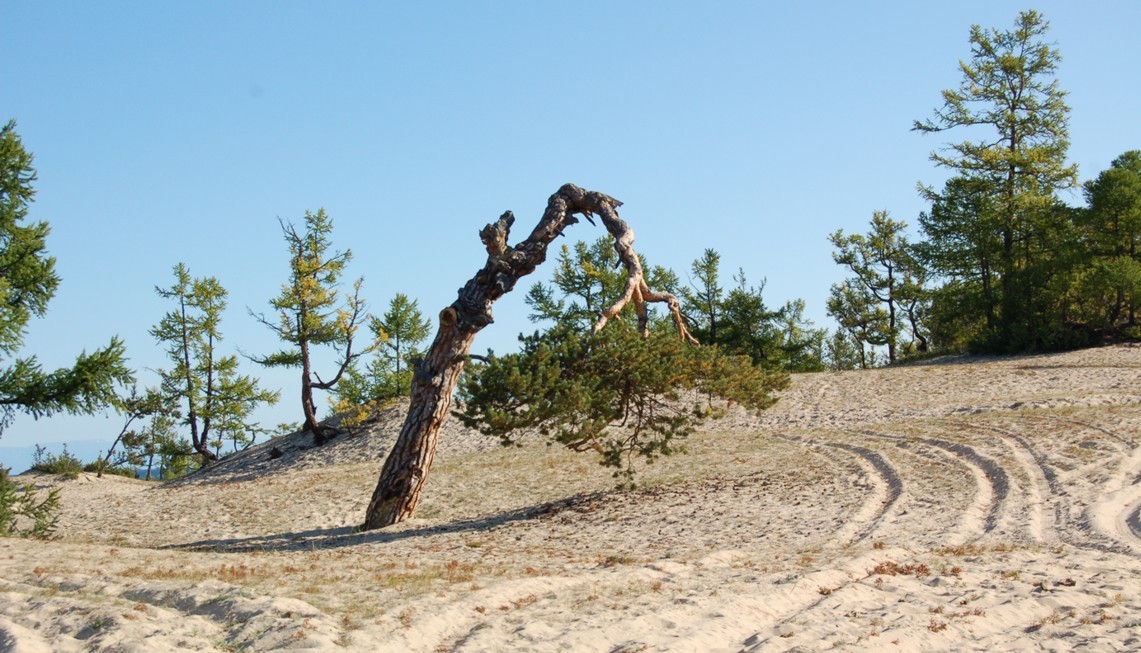 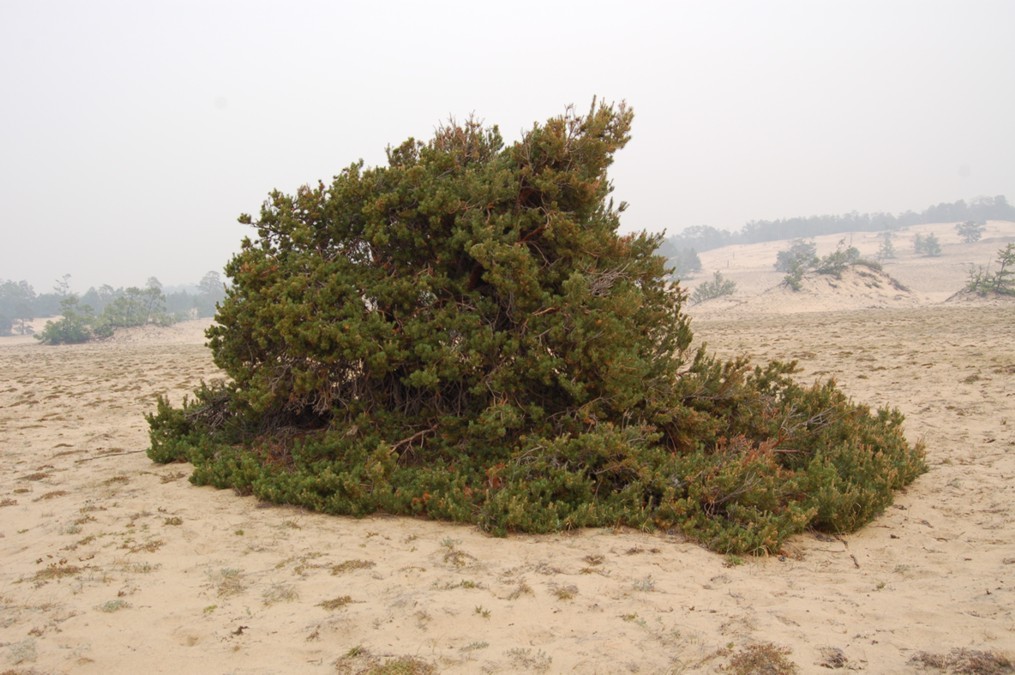 Very often their age exceeds 200-300 years. Such pines and larches are unique and need protection. On the sands there were herbaceous plants, including “red book” endemics and relics.

Natural boundary Peschanoe, located 20 km to the north from Khuzhir in the Nyurga Bay is famous for its picturesque sand dunes.

Constant winds blowing from the sea, carry sand from the shore and create sandy deposits, which in form of high hills, ridges and dunes occupy an area of about 3 square km. These are the largest sand deposits on the entire western Baikal coast.

A rare plant grows on the sand dunes, it is not found anywhere else in the world – Astragalus Olkhonskiy, perennial from legume family.

You can also meet stilted trees, that raised by 30-40 cm on their roots, on the edge of the forest, where the sands break. 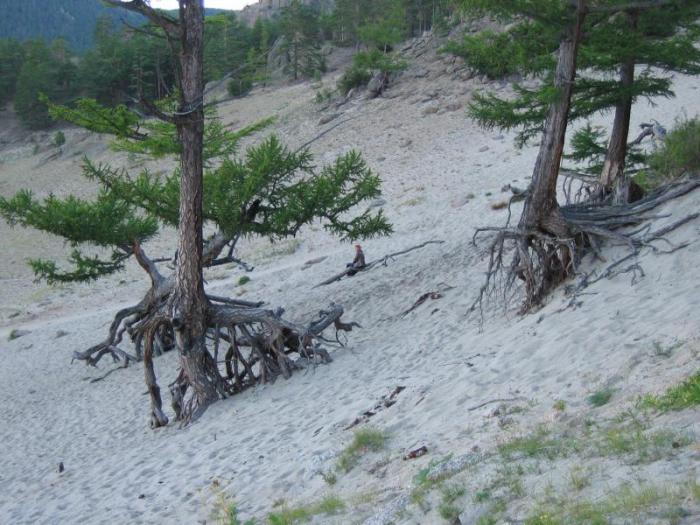 An extremely picturesque rocky cape, about 1 km long, is made of marble of light tones, densely covered with brownish-red lichen patches. It is located 4 km from the northern edge of the island. From afar the cape appears to be a homogeneous rocky cliff. Only near the cliff rocks seem to part, opening for gaze a small cove closed with steep marble walls.

At full calm it is possible to hit the shore directly. There is a trail that leads to the plateau of the island – this is one of the rare places in the northern part with a descent to the water. Moreover, there is a cave and numerous grottoes in the rock. 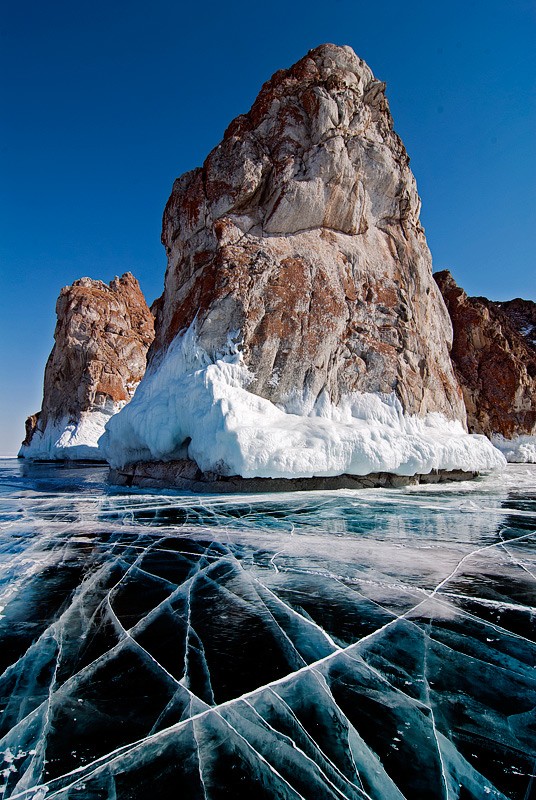 Cape Khoboy (in translation from Buryat – “cuspid, root tooth”) – the northernmost cape on Olkhon. The spectacular columnar rock resembling a sharp canine, from the sea has a strong similarity to the profile of a female head with bust, as on ancient Greek galleys from the east and west. The local name of the rock is Virgo. This place is notable for many-voiced echoes reflecting from the monolithic rock.

There are rare and relict grasses here. In winter you can see the grottoes fabulously decorated with splashy ice and see-through icicles. The road ends 500 meters from the cape. The ascent to Khoboy gives a clear picture of origin of the island.

The skewed tectonic block of the island is clearly visible from the cape, which is steeply cuts off to the east by 100-200-meter cliffs and gently sloping descend to the west towards the Small Sea.

Cape Khoboy is located near the widest place in Lake Baikal (79.5 km), and only on a sunny day you will be able to see the eastern shore – the mountainous shape of the Holy Nose peninsula. 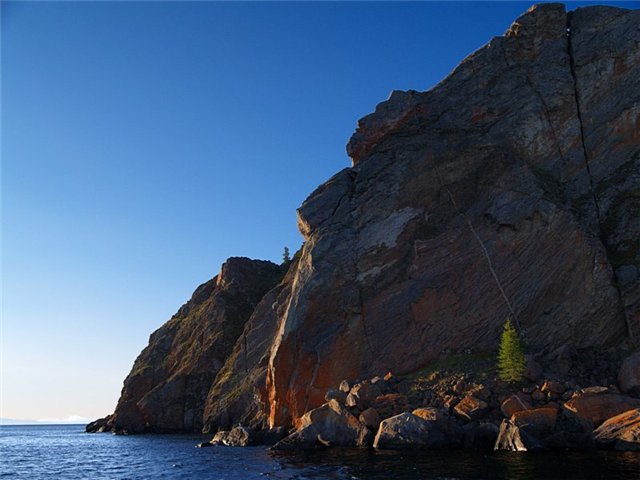 The area of ​​Uzury is the first from the cape Khoboy sloping pass, which leads to the eastern coast of Olkhon, where the road goes down to the water. Here, since 1953, operates a weather station, which refers to the oldest ones at Lake Baikal. Jointly with weather stations located on the Great Ushkan island, in Dawsh, on Sunny Cape and in Tompa, it monitors the weather conditions on Lake Baikal.

It is interesting to come to Uzury in the winter and take a walk around steep cliffs along the ice towards Khoboy. When the island freezes, rocks covers with beautiful splashy ice forms and numerous ice decorations as icicles and stalagmites. 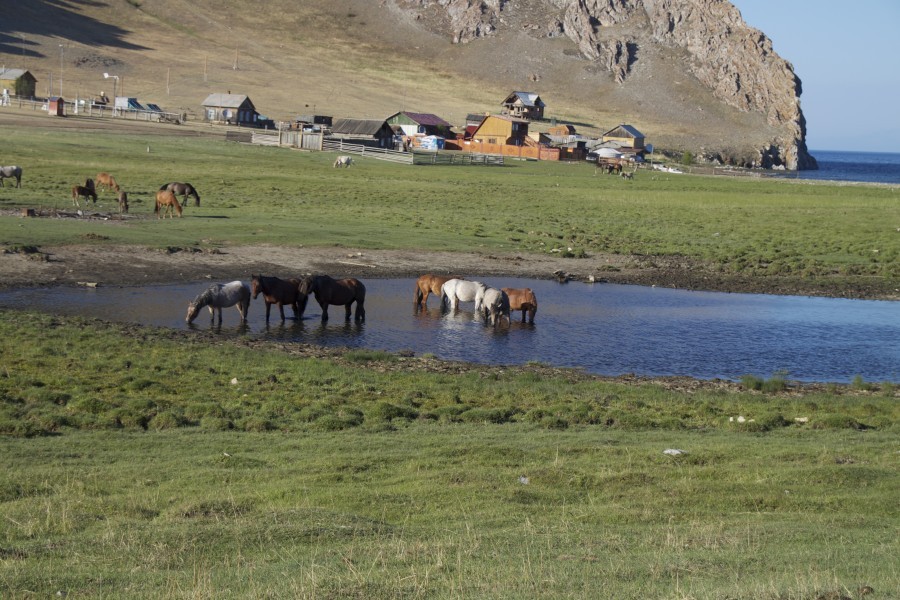 Mount Jima. At the distance of one day journey from Uzur  you can find mountain Izhimey (1276 m). This is the highest point of the island. The mountain is considered sacred among the local inhabitants. The name of the area Izhimey comes fr